On Thursday 16th January 2020 volunteers from the Friends of Cecilly Brook and Hales Hall Pool set out to uncover the art work that was completed in 2007, but had become overgrown in recent years, so disappearing from view. The installation comprises a predator/prey labyrinth offering 2 routes to a raised stone area.

Lucy Eames was instrumental in commissioning the art installation and way marker posts along the brook as part of a community arts project.

The intallation was completed in 2007 using local materials and metal work and was a collaboration between Ian Naylor, a local artist, and Hillary Cartmel, an artist based in South Yorkshire.

The piece was designed as a Predator/Prey racing maze, offering 2 possible routes, designed to allow 2 people of differing physical abilities to race to a common goal.

The metal work, built by Hillary, highlights the moon crater named after Mary Blagg, born in Cheadle in 1858.

A survey was completed in July 2019 to look for evidence of water vole activity along Cecilly Brook.

Although there were no sightings of water voles there was evidence ot their activity in the form of latrines along the banks of the brook. The greatest concentration was found midway between Ashbourne Road and Oakamoor Road, with some more latrines in the section above the old JCB factory.

We are desperately trying to save our diminishing population of water voles which is under threat both nationally and locally from a variety of factors. We would like to keep disturbance of the voles to a minimum and ask dog owners to keep their dogs under close control and not let them into the brook.

The 4 balsam pulls in July and August proved to be very successful thanks to the regulars who turned out in rain and sun to tackle the ongoing problem of Himalayan Balsam.

The pulls have been going on for 5 years now and the cumulative effects are at last beginning to show with considerably less balsam in the section between Oakamoor Road and Ashbourne Road. This has allowed the group to spend more time on the area south of Ashbourne Road and here also there are signs that the regular pulls are working with less balsam in evidence.

There is still work to be done in controlling the balsam so dates for pulls next year will be published in the spring of 2020. Volunteers are always welcome. If you can help, look out for the dates on this web site.

Over 30 different species of bird have been spotted over the winter on or near the Cecilly Brook reserve.

Members are hoping to take part in the National Willow Tit Survey 2019-2020 which runs from February to the middle of April.

Although it is the second fastest declining species in the UK after the Turtle Dove and is a red listed species we are fortunate to have Willow Tits on the reserves.

On Monday 14th January 2019 the bird boxes along the brook were cleaned out and the new willow tit boxes that were made by members were put up.

90% of the existing boxes showed signs of being occupied the previous year.

The location of all of the boxes has now been mapped using GPS to improve monitoring of activity. Members of the group will check on activity at the boxes over next year’s breeding season.

Through the efforts of a few enthusiastic volunteers on Thursday 11th October and Monday 22nd October a section of scrub was cleared from along the brook letting in light, with the aim of improving the habitat for the water voles and kingfishers. 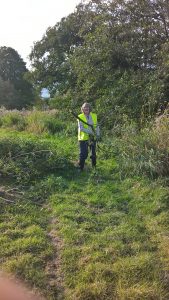 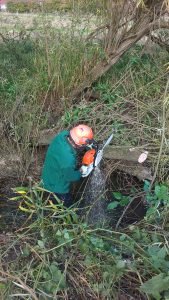 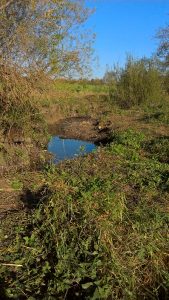 Some of the areas of scrub are being retained to maintain a diversity of habitat, with species such as the willow tit and other nesting birds benefiting. Unfortunately the planned work on Friday 7th December had to be cancelled due to adverse weather conditions.

With a good turn out of volunteers we managed to make 13 bird boxes. 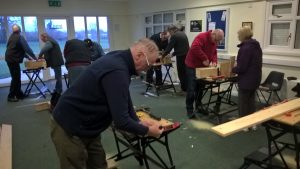 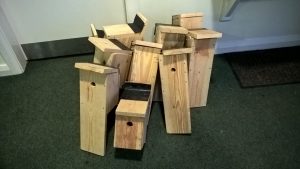 Various different types of boxes were made, including ones for willow tits which have been spotted on the reserve. The boxes will be put in place on the reserve later in the winter to add to the existing boxes. They will be monitored over the coming years to check on the success of the project. 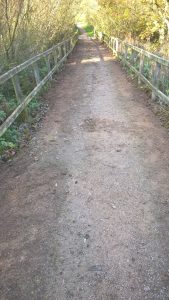 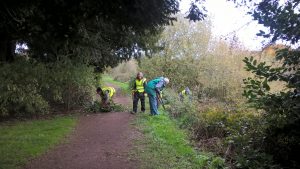 Brambles are a valuable habitat for many species, but some of the brambles were encroaching on the paths around the pool and therefore needed to be cut back to ensure access is maintained across the site.
Grass was growing across the paths making them narrower. The grass was cleared from the sides of the paths to return them to their original width.
Many thanks to the volunteers who worked on the day.

Alongside the brook there is a buffer strip which links the brook with the adjacent amenity grassland. Each year one third of this area is strimmed and the material removed to keep the fertility of the soil low to encourage a range of wild flowers and grasses. This work is done on a 3 year rotation, with a different area cleared each year. This helps prevent the strip degenerating into scrub and provides a more diverse habitat to help support the local water vole population and other wildlife. 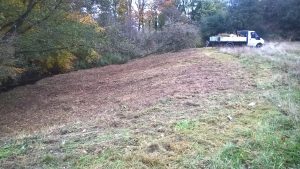 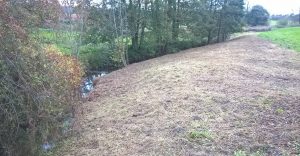 The above areas were amongst those cleared as part of the rotation in October 2018.

Look out for willow tits which have been heard recently along the brook. Also look out for Redwings, Fieldfares, Siskins, Long Tailed Tits, Nuthatches and Kingfishers, as well as the normal garden birds you would expect to see in the winter.

Buzzards have nested near to the reserve and can often be seen soaring overhead.

It will soon be time to look out for this year’s Starling murmurations and winter migrants, especially at Hales Hall Pool.